« If a country were to leave the Eurosystem, its national central bank’s claims on or liabilities to the ECB would  need to be settled in full. » 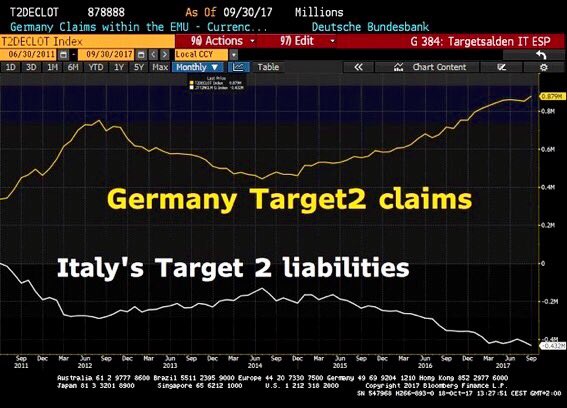 Mario DRAGHI
President
Mr Marco Valli and Mr Marco Zanni
Members of the European Parliament
European Parliament
60, rue Wiertz
B-1047 Brussels
Frankfurt, 18 January 2017
L/MD/17/34
Re: Your letter (QZ-120)
Honourable Members of the European Parliament, dear Mr Valli and Mr Zanni,
Thank you for your letter, which was passed on to me by Mr Roberto Gualtieri, Chairman of the Committee on Economic and Monetary Affairs, accompanied by a cover letter dated 8 December 2016.
As conveyed in my reply to your honourable colleague MEP Markus Ferber on 28 November 2016, the recent increase in TARGET2 balances largely reflects liquidity flows stemming from the ECB’s asset purchase programme (APP). TARGET2 balances have been increasing since the start of the APP owing, in part, to technical factors related to the structure of financial markets. In particular, settlement services are
concentrated in some financial centres. Cross-border payments by national central banks for securities purchased under the APP give rise to changes in TARGET2 balances in the course of the implementation of monetary policy.

Almost 80% of bonds purchased by national central banks under the APP were sold by counterparties that are not resident in the same country as the purchasing national central bank, and roughly half of the purchases were from counterparties located outside the euro area, most of which mainly access the TARGET2 payments system via the Deutsche Bundesbank.

This, in turn, resulted in an increase in the Deutsche Bundesbank’s TARGET2 balance vis-à-vis the ECB. This particular mechanism is explained in more detail in our Economic Bulletin and in the Bundesbank’s Monthly Report

….
If a country were to leave the Eurosystem, its national central bank’s claims on or liabilities to the ECB would  need to be settled in full.
Yours sincerely,
[signed]
Mario Draghi