The Ukrainian ‘counteroffensive’ in the southern Kherson region has made little progress and binds a lot of Ukrainian resources and available units.

Despite that, and against advice from the U.S. military, Ukraine has now launched a second ‘counteroffensive’ in the north-eastern Kharkiv region of Ukraine.

AFU has launched an offensive on Balakleya, heavy fighting started is underway

▪️For more than a month, the AFU pulled together reserves and created a strike force in the Kharkiv direction.

▪️Now, after a powerful artillery preparation, they have gone on the offensive, throwing forward armored vehicles, fighting is going on on the outskirts of the city.

▪️The artillery and aviation of the Russian army are hitting the sprawling advancing enemy forces.

▪️Allied forces blew up bridges to obstruct the AFU’s advance.

▪️Armored vehicles work in battles on the outskirts.

▪️Allied reserves are being tightened.

▪️The offensive in the south is not a distraction, it’s just that the enemy has planned and launched several offensive operations, and attempts to break through are also continuing in the Kherson region

▪️There is no panic. In Balakleya there are mostly mobilized. Now reserves are going to Balakleya. The barrel and rocket artillery are working. Aviation is actively working.

There is no talk of a deep breakthrough. The situation + is similar to the Nahtsee counteroffensive in the Kherson direction. 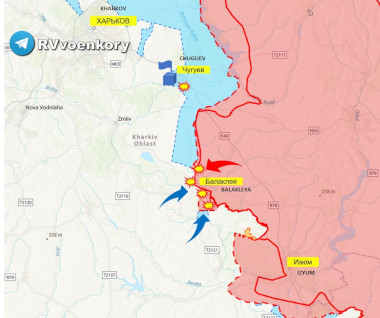 Balakleya (Balaklya, Balakliia) originally had 25,000 inhabitants, many of whom will likely have departed by now. On March 3 it was taken by Russian forces without much fighting.